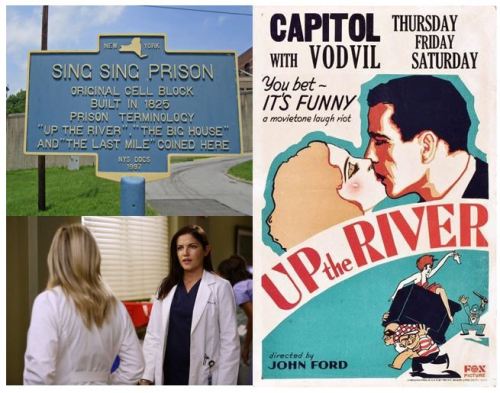 What was said? That the word on the street is the Pediatric chief is “up the river””

Did someone really say that? Dr. Minnick on Grey’s Anatomy (yes, I shamefully still watch it) insensitively said it on Season 13, Episode 11 about Dr. Alex Karev.

What does it mean? It means to be in prison / incarcerated or be sent to prison.

Origin: It appears to be first used in 1981 and originates from the fact that convicts from NYC would be sent up the Hudson River to Ossining State Prison (known as “Sing Sing”).

If you were a serious criminal, you were sent to Sing Sing “up the river” as opposed to the run of the mill pickpockets or those who committed minor offenses who stayed in more local prisons. Now the term has come to apply to anyone sent to any prison.

Up the River is also a 1930 comedy movie about escaped convicts, directed by John Ford and starring Spence Tracy and Humphrey Bogart in their feature film debuts.

“Up the river” should not be confused with being sold “down the river,” meaning to be deceived and originates from the Civil War era sending Northern slaves down the river to work on cotton plantations.

3 responses to “Up the River”

Give me your two cents... Cancel reply

This site uses Akismet to reduce spam. Learn how your comment data is processed.