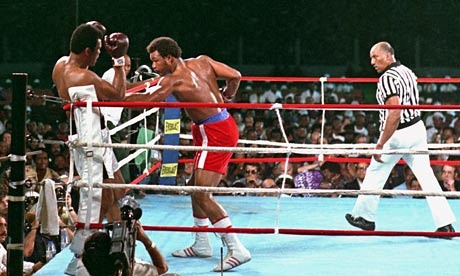 What was said? “We’ll just Rope-A-Dope until the change comes through.”

Did someone really say that? Yes, at a meeting when discussing upcoming changes to a marketing program and how the program will be affected (if at all).

What does it mean? Basically, in this context, the plan was to “lay low” or resume business as usual until the change to the program actually happens.

Origin: The term originated in the 1970s and refers to a move by Muhammad Ali, and his tactic in a boxing match with George Foreman in the infamous “Rumble in the Jungle” match. Foreman was favored to win and during the fight, Ali purposely provoked Foreman into attacking and forcing him with his back on the ropes.  The tactic allows the boxer (in this case Ali) to take a protected stance and allow the blow of the punches from Foreman to be absorbed by the ropes and not just his body so he can prepare for a counter-attack. The idea to use the move by Ali was apparently suggested to him by boxing photographer George Kalinsky who told him: “Why don’t you try something like that? Sort of a dope on the ropes, letting Foreman swing away but, like in the picture, hit nothing but air.” Some believe that Muhammad Ali coined the phrase, and others that publicist John Condon polished the phrase into “rope-a-dope” (originally known as “the turtle”).

In business, or non-boxing setting, the term has come to be used as a “rope-a-dope” strategy referring to any strategy where an apparent “losing” or passive, not aggressive position is assumed in the hope of eventual victory – so in the case above, staying the course of action allows us to win in the end when changes hit the program !