What was said? “So… I mean the whole kit and kaboodle on the job front is…”

Did someone really say that? Yes, in an email to me about what’s really going on with a friend’s job.

What does it mean? The whole shebang, the works, the full story.

Origin: “Kit and Kaboodle” has origins in the 18th century, England. Kit, which comes from the word “kith” meaning “estate.” So the “Whole Kith” would mean everything one owns. Soldiers in the 1700’s also carried a bag with everything they needed called a Kitbag. Kaboodle (or Caboodle) has a few more variations of origin. Some say it comes from “boodle” which was known to describe a collection of items or people. Caboodle was also used at times as a legal term for “estate”.  Some believe it’s from the Dutch boedel, meaning one’s inheritance or estate. In the US, boodle came to mean money attained illegally / through corrupt means. The phrase “the whole boodle” can also be used to describe the same thing. The phrase also appears in Grose’s Dictionary of the Vulgar Tongue in 1785, a dictionary of slang words, pretty much the precursor to Urban Dictionary. 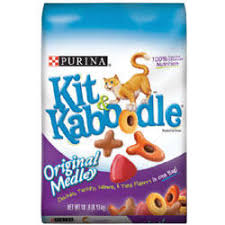 Commercially, Purina’s “Kit and Kaboodle” pet food means your precious little cat is getting “the works”.

In the 90’s, there was an extremely popular product: the “Caboodle”… it was a magical place for teenage girls to store the makeup they weren’t allowed to wear.